Commander Leonid of the 12th Company

Commander Leonid, overall commander of the 591st Expedition and all of the Astartes, Imperial Army regiments and elements of the fleet it contains. For the purposes of the game, Leonid ‘counts as’ Commander Dante of the Blood Angels. 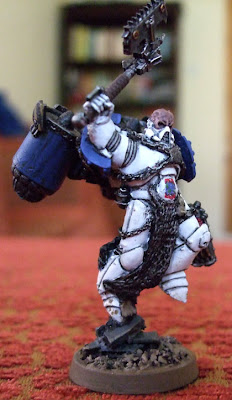 Leonid was one of the Legions longest serving members, and as a Veteran of Terra he fought as a captain of the War Hounds for over a century before the discovery of the Legion’s Primarch Angron. Fighting alongside the Blood Angels during the early days of the Crusade Leonid became a close comrade of Furioso, a Captain of the 9th Legion, and as part of the fledgling 21st expedition the two Captains egged on their troops to outperform their fellow legion brothers. But despite placing an emphasis on assault and delivering the killing blow, the War Hound Captain understood the importance of mixed unit tactics. Against the barbaric empires of Korsicaa, a fearsome offshoot of humanity who’s mutations and corruption gave them unrivalled ferocity in melee combat, Leonid organised scouting fire-teams to draw the frenzied charges of the natives. As they were lead into narrow defiles or valleys, surrounding devastator and artillery units would open fire and annihilate the enraged Korsicaans. Finally previously hidden assault troops of the two Legions, often with both Leonid and Furioso at the forefront, would charge in and finish off the enemy formations, a mountain of heads marking the humbling defeat of the natives in their own custom.

When the Crusade finally discovered their Primarch, Leonid was overjoyed despite being too far away to witness it personally. Finally the 12th Legion had found its progenitor, and Leonid was among the Legion when they knelt before him among the fiery remains of a world brought newly into compliance. The Commander of the now renamed World Eaters welcomed the changes which Angron brought, and understood the value of the berserker implants which had created perhaps the most devastating assault units yet seen in the Crusade. Yet, he also understood they had their place as part of a greater whole, and as such the World Eaters of the 591st expedition portrayed a far more balanced approach to the compliance of Konos III than might have been displayed by other elements of the Legion.

Leonid closely orchestrated the compliance of Konos III with Commander of the Fleet Borya, from the early days of the initial assaults and the massive logistical effort involved, through to the overseeing of recon units which were attempting to stymie the disturbingly effective attacks by guerrilla units once the armies of Konos had been destroyed. Leonid often led these rapid reaction forces himself, indicative of his own continuing zeal for combat but also a sign of frustration at their elusive foe.

Commander of the 12th Legion

Leonid has been there since the beginning; he has trod the soil of a hundred worlds and has fought and slain the worst the galaxy has to offer. To the veterans of the Legion he is a respected and trusted commander, to the new recruits a figure of awe and the personification of the Legion.

Leonid has the Fearless and Rites of Battle special rules (allowing any unit on the tabletop to use his LD value). His presence in a force inspires nearby troops to immense of valour, giving all units within 12” the preferred enemy special rule.

Chainaxe – Created by Angron’s personal artificers, one of these was handed to each commander within the legion to commemorate his taking command. Its blades are crafted from an unknown material, thought to be so tough that it required the entire energy lattice of a mechanicum forge to cut it to the required shape. Its edge will never dull, and powered by a prototype plasma cooled engine it will never tire. It counts as a master-crafted power weapon.

Terror of the Legion – To many foes the snarling facemask and countenance of Leonid’s respirator is a representation of the Legion, of sharpened teeth closing around their world. The site of Leonid and his Veterans launching themselves from above with the roar of their jet-turbines and chain-weapons spinning is enough to unnerve the staunchest of foes. All enemy models within 6” of Leonid suffer -1 to their WS and BS.

Prototype Plasma Weapon – Furioso of the Blood Angels personally presented this weapon to Leonid on completion of the Korsicaa campaign, after the two Captains fought back to back during the final action of the expedition, and as a mark of their comradeship. It features a level of technology and power which would never be matched by other, later productions. Its firing effects count as a melta gun.

I wanted the Commander of the Expedition to really stand out from the crowd, both in terms of representing him on the tabletop, and in terms of modelling. Leonid is made from a combination of the Jump Pack Chaplain model, and a Forge World Khorne Terminator Head. I removed many of the embellishments found on Chaplain armour, and added greenstuff to the scrolls to make them look like chainmail (which I think sits well with the other Veteran units in the force.)

Finally, I felt that the rules for Dante could easily be applied to Leonid – the power of the Commander of the Blood Angels in close combat a great match to how I imagine a Commander of the 12th Legion during the Great Crusade must have been!

Over the course of the weekend of the Age of the Emporer 2 weekend I made an effort to photograph all of the World Eater armies present. The level of imagination involved as well as standard of painting astounded me, and a couple of ideas are definately going to going into my future projects log!

So without further ado, here are the photos which hopefully should serve to inspire! If you see your own army on this list, please let me know and I'll add credits.


Army 1
I had yet to see this chap's army anywhere on the web, yet it looks like we had the same ideas for alot of things! ((EDIT++ This army belongs to Jono, who I had actually met at AoTE. I really recommend taking a look at the rest of his army, which can be found here!)) 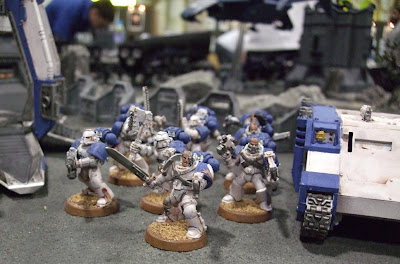 A mix of armour types with a variety of different weapons, whoever made this army obviously made some effort to keep it as canon as possible! 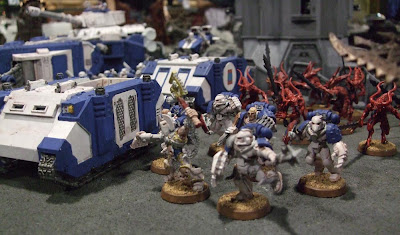 A pretty interesting version of Kharn, who seemed a popular special character (which isn't surprising considering how powerful he was in the rules pack!) What looks to be an honour guard accompanying him, this unit would have hit very hard looking at the variety of close combat weapons they are wielding. Note the daemons in the background, something which identifies this force as being well along the path towards corruption. 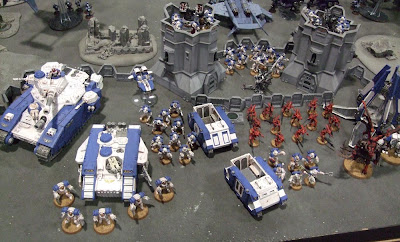 A complete army shot. A very similar army to my own, with elements such as the terminator conversions, land raider and armour types done in a similar manner. The rhinos with the hatches open on the roof are 'Thunder Rhinos', an open topped varient which although more vulnerable allows a charge straight into combat (not suprisingly, these seemed quite popular with WE forces!) Notable extras include the Fellblade, and the greater daemon on the right.


Army 2
This army qualified for one of the 'best painted army' places and it wasn't hard to see why! Yes, it's not anything near 100% canon, but what does it matter when an army looks this good? A beautiful colour combination, I thought the use of gold sets off the white very well, and the army was full of tiny details. 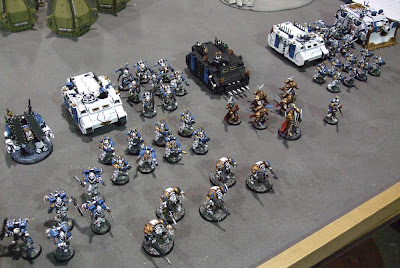 The cursed bunny ears, but painted this well in gold its kind of forgiveable! 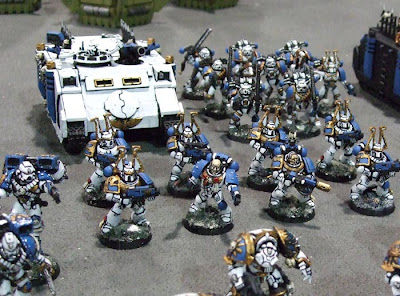 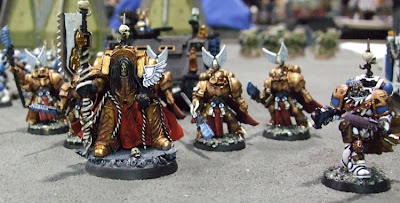 Angron and his honour guard. Goodness knows what the chap on the right is made from, but it looks very effective nonetheless. This was a real artist's army, and I can't recommend enough clicking on the photos above to take a look at them in more detail.


Army 3
I think this was perhaps the biggest collection of Rogue Trader models anywhere at the event! i think with the exception of the drop pod and daemon models, there is barely a miniature here that has been manufactured within the last 18 years! 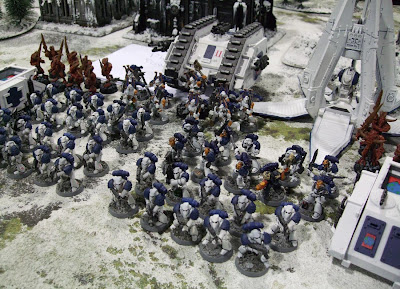 This was the army of a chap called Phil who was in the same group as me (part of the Graia campaign). The 26mm scale of these miniatures belied the horrific striking power of the force - i think Phil won every game he played, other than the doubles game where he was unfortunate enough to be allied with the force from the 592st expedition *cough* :)

If anyone has any photos of their World Eater force from AoTE 2 which I haven't featured here, please drop me a link and I'll update this post!
Posted by Pacific at 13:21 7 comments: