This is a WIP of a new Apothecary, kitted out in Mk5 armour. Even though he is going to be a counts-as Sanguinary priest in game, I don't want him to be too grandiose. He's just a combat medic, attached to other squads of World Eaters as and where he is needed. 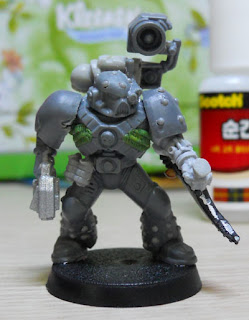 I have made the mk5 armour from a standard mk7 set, using the tutorial found here.
The head is from the marine bike sprue, and the bionic arm from the FW veteran squad (got a few bionic left arms lying around from those packs!) The chain weapon, used to cut open marines armour (and to treat them, or maybe get to the progenoid glands?!) I think is from the old 2nd edition ork CC weapon sprue. 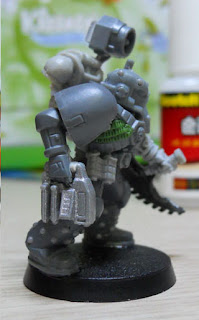 Sadly I don't have a substantial bits-box while I am away from home. I'm hoping not too many people will identify his medical kit as a Tau accessory (did marines get tried for Heresy back in the Great Crusade? Have some Tau travelled back in time so the marine could get hold of this piece of kit? There are all sorts of Terminator-esque time-travel paradoxes involved here :) )
Hopefully when painted, it will look a bit less obvious, and I may well modify it slightly.
The scanning array on the backpack is from the vehicle accessory sprue. I didn't have any access to cabling for the torso, so I resorted to using greenstuff. I actually think it has come out a bit better than the cable I have used previously, and will have to see how it looks when it is painted.
As you can see he still needs basing, and some mold lines cleaning, I only seem to notice them when I look at the photo :)
As for colour scheme, the guys on the Great Crusade website have pointed me in the right direction, and there is evidence of Apothecaries in both the '40k' colour scheme (white armour) and also in standard Legion colours. I think I might go with the latter route, as it ties in more with how the Librarians and Techmarines are represented, and also paints the marine as a specialist who is still part of the Legion. He hasn't gone off to train in some ancient special apothecaries sanctum, it's been handled in-house as part of the Legions operations. Although I realise that his armour will be white in any case, so it makes very little difference! :)
Posted by Pacific at 18:30 4 comments:

Here is a short story, based during the events of the compliance of Konos III (the setting I have created as a background to this blog). I hope you enjoy it.
----------------------------------------------------------------
A Small Part of a Larger Plan
Gesard didn’t smell good at the best of times. Now, within the tight confines of the tunnel and with Gesard’s rump directly in front of his face, Teso sorely wished that he was somewhere else. He could feel the others pushing up against his feet from behind, and with the way ahead blocked he felt distinctly uncomfortable. A few of them had gone a little crazy down here in the tunnels, got the shakes and started seeing things in the dark. Teso counted himself fortunate that he wasn’t one of them, although that didn’t mean he had to like it. Fact was that most of them couldn’t come down here, couldn’t squeeze down the tiny access tubes that made up the tunnel network, couldn’t do the important work. Boss had told them what had to be done, how he and the other boys were the only ones that could do it, how they had to keep fighting even though they were afraid.

A muffled squelch sounded from Gesard’s camouflaged fatigues once more, and Teso cursed him even as he heard the others behind him illicit nervous laughter. “Shut it you animal…” he paused for a moment as they shuffled forward. Struggling to breath within an environment which would have been stifling at the best of times he nudged the rump in front of him. “Have you reached the hatch?” Gesard replied in his high-pitched, slightly petulant tone, “yeah Teso, it’s right here.”

“right here, what?” Teso snapped at him.

“Uh yeah, right here.. sir” the camouflaged pants conceded somewhat reluctantly. Boss has told them about how important it was to respect ranks, how they had to follow the plan to the letter. Teso was determined that his lads would look good in their leaders eyes. That one day they would get to join the unit that Yama and some of the other older boys had gone to join, taking part in the really important and heroic jobs. The ones that would help drive the invading bastard scum from their world.

Gesard grunted again as the pushed the hatch forward, accompanied by a rumbling and scraping sound. For a moment Teso feared the sound which meant that the tunnel was about to collapse as dust and debris came spinning out, but it soon stopped. Someone behind him coughed, and Teso blinked as the hard light of the morning sun came spilling into the tunnel. One by one they filed out, and stood around the entrance hatch, gingerly stretching limbs which had been cramped in one position for several hours. After a few moments, and after checking the half dozen of them were present, Teso nodded and spoke to them all; “Ok, let’s do this. Boss told us the plan, we know what we have to do.” He hoped that his own concern at what they were about to wasn’t revealed by a trembling voice or hand, or by dropping eyes. He hoped that the fear that he saw in his friends was not mirrored by himself. There was a murmur of assent from the group as they followed him from behind the refuse pile and narrow alley into which they had emerged. Plucking up a courage that he didn’t know he possessed, Teso turned to them and grinned, “come on this will be fun… just like a game of chase and bag.” Gesard’s squeaky voice replied even as the others looked on, “yeah, but we haven’t ever been chased by a monster before.”

“Ok.. this is it..” Teso lay flat up against the wall, his actions followed by the others further along the alley. He unwrapped the small package he held in his hand, taking out a small autobike mirror contained within, and held it by its bracket. Holding his breath, and with the delicacy of a man putting his hand into a nest of vipers, Teso held out the mirror so that it emerged from around the corner of the building. Blinking the sweat from his eyes, he forced himself to calm although his heart thundered in his chest and the narrow stem of metal in his hand shook and threatened to slip from his sweaty grasp.

Gradually the shaking lessened, and the scene revealed by the mirror came into focus; As expected, the street was largely empty, windows shuttered and doors barred despite the summer heat. A few market stalls stood untended, although an old man sat by the side of the road, a collection of nuts and herbs placed somewhat optimistically in bowls before his hunched form. A stray dog with only 3 legs made its way haphazardly across the road, pausing to sniff at some small animal which had died there. A miniature dust devil whipped up, pushing refuse into the air. But the rest of the street was empty. Teso experienced a moments doubt, where was it? Why wasn’t it here? Maybe the boss or his information had been wrong?

Teso was about to turn to Gesard and tell him, when something caught the corner of his eye. His stomach wretched and heaved all at once, and threatened to come rolling up his throat. His mouth hung agape and he swallowed, a mixture of dust and sand making it a sensation like sanding wood. But he didn’t notice the sensation nor the discomfort, for his attention had been drawn inexorably to what he now saw stood in the corner of street.......
Continued in part 2!!
Posted by Pacific at 08:23 1 comment: