..Just another skull? But I already have so many..

The voice boomed across the room. A palace, resplendent in brass and fire, at the centre of which a horned monstrosity sits upon a skull throne. Legs crossed, his giant bestial head rests upon his clawed hand, and his crimson eyes seem half-mast and disinterested. Another figure enters the room - obviously a warrior, his giant chain-axe betrays him as such, although any casual observer would wonder why he was partly naked, and the slightly comical nature of the ears upon his helm. The giant figure upon the throne spoke.. 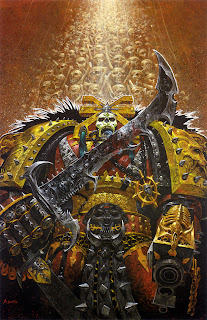 "That is so thoughtful of you, Kharn... Yes, indeed it is a very fine example of a cranium. Perhaps even nicer than the one you brought me on Thursday.  No... no, I don't think there is room on the fireplace. I'm worried those Squat skulls will break with the weight of the others on top of them, especially those Warhammer Fantasy zombie heads. I'm down to my last three... And it's not like you can just pop out and collect some more!..
Right yes.. on the huge, mountainous pile over there with all the other Grey Knight and Blood Angel skulls.. Buddha knows how the Emperor keeps churning out those guys!"

Perhaps best not to look at the date of the previous post?

It's been far too long. This blog, like so many others before, and so many more to come, has started to slow to a crawl as my own enthusiasm for the project dwindled.

That's a topic for another time, but generally as much as I love the Warhammer 40,000 universe, too many games against opponents who cared little for the aesthetic aspects of their army has left me completely nonchalant about it as a games system. There is a common saying of 'people make a place', and coming up against the same unpainted Grey Knights, Space Marines comprised of 5-6 different chapters (when presumably the painter has got bored after finishing a couple in one colour) did nothing to inspire me to play the game. I realise what you 'get' from a gaming system is different for each of us, but sadly for me the game mechanics of 40k aren't strong enough to carry the experience on their own. And, I found myself getting annoyed by the level of abstraction involved, with comments such as 'why is X just doing that' and 'how on earth does that happen', to the point where I just wasn't enjoying it. There are only so many times you can laugh sardonically and make joke references as your troops just stand there like genetically-enhanced melons as they get assaulted and aren't able to do anything to prevent it happening. Now a new work schedule has meant that I couldn't play even if I wanted to, and it hasn't been much of a surprise to find that I'm not really regretting it.

So, really this is just a short blog post to let any followers know that I am still alive! The World Eaters have had their fill in their current form, but I hope that there are other avenues to follow and that some more information can be added to the site. I will say that the new releases from Forge World (specifically, their 'Pre-Heresy' armour marks) make it easier than ever, although more expensive, to start a Pre-Heresy force. Those mk2 and mk3 sets in particular would look great in white and blue, and with some chainaxes thrown in for good measure.

And really, what is that people would like to see? Some modelling or painting articles? Perhaps the World Eaters in Epic or BFG? What about more background or review articles? It's very hard to gauge how many people have actually read this blog over the years, beyond mis-directed 'Jimmy Eat World' fans, and so if there is enough interest I'll try and make some new material for it? Otherwise, well.. I'm not sure how I will break the news to that guy on the brass throne! In any case, feedback of all sorts would be greatly appreciated!